So Friday morning arrived and due to my wonderful jet-lag, I was up with the lark and on the hunt for breakfast. American breakfasts are huge and I adore breakfast so I was thrilled to find a decent huevos rancheros. Having stuffed myself to the point of bursting we decided to head to the home of rhinestones, Du Barry. We met up with of some the other UK performers, Aurora Galore, Havana Hurricane, Daisy Cutter, Ivy Wilde and Trixie Pash and after a quick cab ride in the scorching heat we arrived at a Mecca for magpies. Du Barry’s is literally groaning under the weight of so much sparkle, more sparkle than I had ever seen in one place and it gave me palpitations and I felt slightly sick! The burlesquers dashed from station to station filling baskets with sparkle, much like a BHoF Supermarket Sweep. After an hour of bedecking ourselves in gowns, necklaces, bangles and rings we all paid for our hauls and decided to head to the Burlesque Hall of Fame Museum. We stepped outside into the blistering heat and found that there were no taxis to be found. I felt sure that my time had come – I spend most of my time avoiding the sun like some sort of nosferatu. Although at least having visited Du Barry, I would sparkle like something akin to a Twilight vampire! We waited for what seemed like an age before we (I) made the decision that we would walk to the intersection to try to get a bus back to the city. We trudged along with the sun scalding us, laden down with bags of sparkly shit – we must have looked quite the sight. 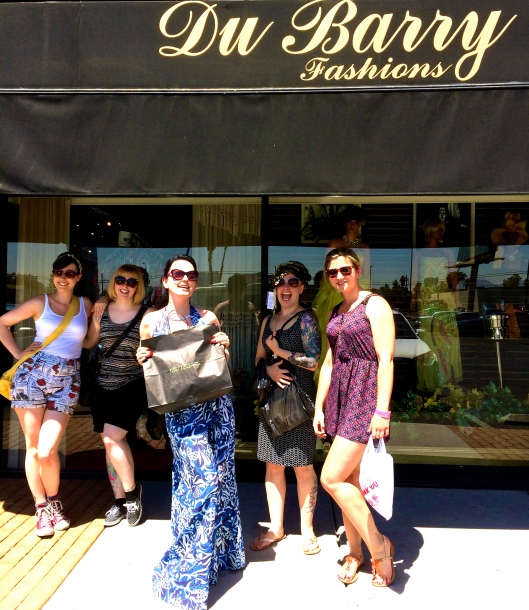 Having made it to the intersection my wonderful husband managed to hail a cab and we piled in and headed for ‘Old Vegas’. The cab dropped us outside the Mob Museum and we strolled down Fremont Street. It was easy, with the old buildings and the neon signs, to imagine The Rat Pack partying there. 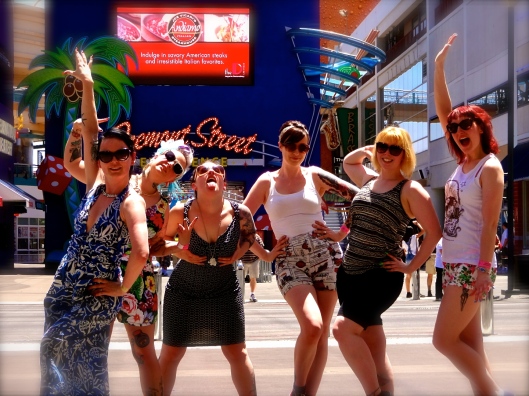 We wandered further down until we came to the Burlesque Hall of Fame Museum, we stepped through the door and paid homage at the shrine to American burlesque collected, treasured and displayed  by Dixie Evans, before her death. It was amazing to see the detailed timeline of burlesque emblazoned across the walls punctuated by artifacts and costumes. It was fascinating but time marched ever onwards and we dashed back to the hotel. 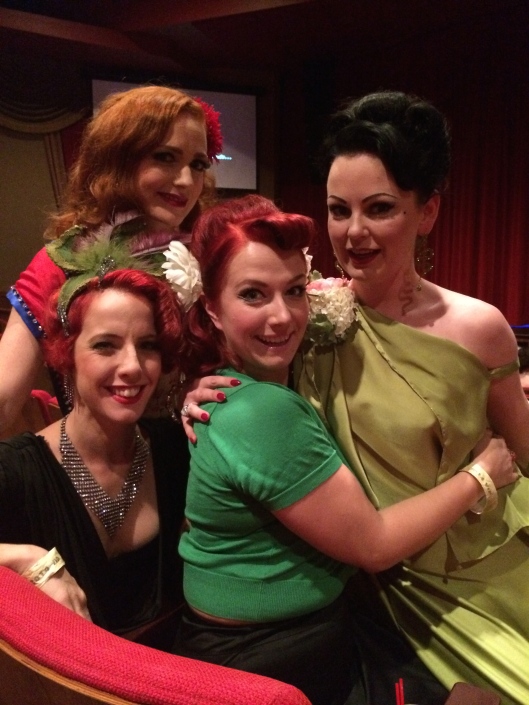 Above: The Aussies and I on Legends Night. What a show, thanks for the tissue scraps ladies!

I managed to catch a snooze before the time came to drag myself out of bed and get myself ready for the evening’s entertainment, the much anticipated Titans of Tease Showcase, also known as Legend’s Night. It’s the heart and soul of the weekender I wore my chartreuse Vicky Butterfly gown as the theme for the evening was green. As we came downstairs, there was a sea of green and sparkles. We took our seats and the show began, it was just incredible to see these women, some of whom hadn’t performed for thirty years, absolutely owning the stage and bringing the crowd to their feet time and again. It is so important to learn from them, to watch and support them; the strings of connections go back through them to burlesque past and through us to burlesque future. It was also incredibly comforting to see that despite detractors and censors over the years, burlesque has and will endure. I wanted to load up a bus full of burlesque-antis so that they could feel the love and admiration in that room and see those incredible performances. `
We wept, we laughed, we cheered and paid homage to those who had died including an incredible tribute to Dixie Evans. The hostess of the show, The World Famous BOB was just amazing. She whipped the crowd into a frenzy with her passion for the art. The audience was left humbled and emotional after seeing these incredible burlesque stars still shaking what their mothers gave them. I loved watching Ellion Ness (The untouchable!), Lovey Goldmine and Miss Penny Starr Snr (Her bump and grind had to be seen to be believed). I think the whole audience felt honoured to be there watching our burlesque history in action. I can only hope to be so awesome as I grow older!
Elated, I dashed up to get an early night, I had a feeling that the next day was going to be enormous!