This week was the first time I have done a tour show since I had Rafferty. We had a show of ‘Songs to Make You Smile‘ booked in to the Swindon Arts Centre and so on Wednesday morning we were up at silly o’clock to get everything ready. In my carefree ‘old’ life, I’d sling a bag in the car and head off. Now, leaving the house, involves packing almost everything minus a kitchen sink. We decided to add a sausage dog to the equation too, why make life simple?

We stopped along the way to p p pick up a pianist! Mr Richard Healey was on keys for this show, which is always a treat because he’s bloody super. We ended up running late, which I hate, so when we made it to Swindon Arts Centre they were concerned that we had forgotten! After explanations of ‘child, dog, traffic!!’ we got to the auditorium for a soundcheck. Dickie and I have soundcheck down to a fine art, literally 3 minutes to check mics and lights. This show, we decided to chuck in a new song to amuse ourselves, (slightly risky, given that I’ve just had three months off and the last tour show we did was in November!!) so we had a quick run through of ‘Sit Down You’re Rocking the Boat’ and we were happy with it.

Backstage, I threw make-up at my face, chucked my hair into an updo, ripped my dress as I dragged it on over my new best friend, my What Katie Did spoon bust Morticia corset and had 10 minutes to breastfeed Rafferty before it was showtime! So I hit the stage slightly flustered but it was fabulous to get back into the swing of things. The show was really marvellous, with a really supportive audience and the new song went beautifully, in fact, it might be my new favourite!

This afternoon, I had a photoshoot with the amazing Terry Mendoza. I absolutely adore shooting with him. We just click, if you’ll pardon the pun! We shot a couple of new costume pieces (a fabulous hat and some Elizabethan-style collar and cuff ruffs) and tried to shoot some pictures of Rafferty, who was having absolutely none of it. Every photo had him screaming or burying his head in my shoulder. After 10 minutes, we gave up!

In other news, Rafferty is trying so hard with noises. He’s copying ‘Guh’ and ‘Brrrrrrrrr’. It’s the best time wasting thing in the world. 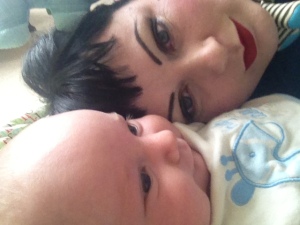 Until next time…
Love Lili

A couple of weeks ago I got a phone call from the lovely Miss Sapphire Rox. She had been let down by her compere and needed someone for an Agent Burlieque show at the Ipswich Regent Theatre on the 22nd March. I had previously turned down doing the show as Rafferty was expected mid-February but since he made his appearance early, I jumped at the chance to get back onstage.
As the show approached, I was understandably nervous. It would be the first time that I had left Rafferty for longer than an hour and a half. This time I would be gone for the best part of seven hours.
The day arrived and I packed my show case, which took an absolute age. When got pregnant, I put my regular performing costumes away. At the time, I thought myself rather well organised but now that I need them again, I see that there was absolutely no rhyme or reason to my packing. There’s a hat here, a bustle there and goodness only knows where I’ve put my fishnet tights?
I also seem to have forgotten what one packs in to a show case. In the past, I’ve been able to pack everything into a ‘carry-on’ sized suitcase but this weekend, however, it looked as if I was going away for a month!
As four o’clock approached, I made sure I had everything and my husband packed the breast pump as I would need to pump because I was away from the baby for so long. I primed the grandparents and gave them the bottles for the evening. Then, with my heart in my mouth, I jumped into the car and sped away, Suffolk-bound.
Like any first-time mother away for the first time, I worried all the way to Ipswich but a quick phone call home reassured me that everything was fine although did little to assuage my ‘mother’s guilt’.
I arrived at the Regent, soundchecked, threw my face on and wriggled into a rather tight costume. Note to self – less cake. Before I knew it, it was showtime and Lili had to get on with the job at hand. 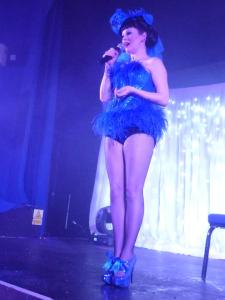 The show was huge fun, lovely acts and a stellar audience who knew how to have fun and being back onstage felt like the most natural thing in the world. The first half flew by and we got to the interval, cue a costume change and a quick pump as there was a risk that my boobs might explode!
Catastrophe! In his eagerness to help me, my husband had missed a piece of the pump, so I couldn’t express at all! By now, I was starting to resemble a porn star with these enormous engorged knockers! Looked fab, felt like hell. 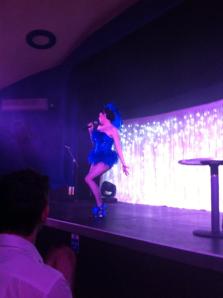 The show finished with a bang with the fab fire performer, Miss Jones.

She completely killed the audience with her devilish fire routine and nothing remained but for me to send them out smiling with a song. 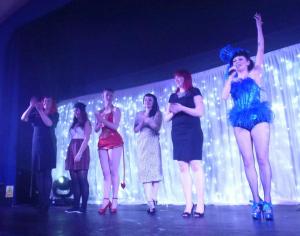 After the show, I packed up my case and dashed back to the car, by now feeling like someone had strapped two huge balloons to my chest. I drove like a bat out of hell down the A12, (within the speed limits of course since it had begun to snow when I left Ipswich) and made it home safely.
It was absolute heaven to get home to my boys, although Rafferty was fast asleep so I had to wait for him to stir before I could feed him.
My husband said my poor boobs were at the same time the most and least sexy thing he’d ever seen!
I guess the moral of the tale is that motherhood alongside travelling performer/compere for hire is a learning curve and I’m sure with time I’ll have it down to a fine art but for now, it is a case of ‘can do better’!!