Way back in 2008, I was doing the Edinburgh Fringe, guesting one evening at a late night cabaret show run by Paul L Martin. I was on the bill alongside some silent comedy chap, the man with sticky tape on his head, or something and also a can-can troupe. Now, I was done and getting dressed backstage, (at that time I was doing my operatic burlesque routine, La Butterfly Deshabille) and the can-can troupe were on. Halfway through their routine, it all goes west. The chap is supposed to catch one of the girls and instead, his leg makes contact with her face. Blood running from her nose, she tries to carry on the routine hoping that the audience won’t notice. Sadly, it’s hard to ignore plumes of blood flying horizontally on every spin. She calls time and makes a dash for the dressing room.
“My fucking nose” she shrieks, “Do you have any idea how much this fucking nose cost me?”. As blood streams from her nose, I lean over and wrapping some ice cubes in my vest top, I offer it to her to stem the flow. “Your father’s a surgeon,” she yelled at the terribly apologetic chap “He better have a fucking good plastic surgeon friend if my nose is fucking broken!!”.After twenty minutes, we’d stopped the bleeding, ascertained that the nose was not broken and she gave me back my soggy, bloodstained top.
I packed up my costume and slipped out of the venue, sans top!

I get a very exciting email about a new cabaret club opening in Glasgow and would I like to come up and host a weekend. Now, I’m not great with a) leaving home and b) new people or places. Being a creature of habit, I’m very happy to reside comfortably in my comfort zone. So the day comes and I hop on the plane at Southend Airport bound for Edinburgh. I’m met at Edinburgh by the completely delightful Gypsy Charms, whose world has revolved around mine for years. We’ve met briefly here and there but never managed to share a stage. Until now.

We drove through to Glasgow and got to Wild Cabaret, an amazing purpose designed cabaret club right in the heart of the Merchant City. I sound checked and then Gypsy sat down beside me on the floor of the dressing room to go through the running orders for the night. As we chuckled together, I glanced at her profile and a memory sparked. I asked if perhaps she had once been kicked in the face in a can-can in a late night show in a drippy cave? She burst out laughing and we cackled together about that ‘bloody’ show. The laughter continued throughout the weekend, through two shows and one hilarious drive back to Edinburgh where I was regaled with tales of strippers for the whole drive. If you haven’t had the pleasure of Gypsy’s company, you have missed out, she is one funny lady. I haven’t laughed so hard in an age.

The shows were amazing, the venue glamorous, the crowds were warm and welcoming and to top it all, the gorgeous Frank Sanazi left me some strawberries in my hotel room for a late night, post show snack. After a long day and a late show, I have never been so happy to see strawbs! I even got to meet a very affectionate dove called Athena. 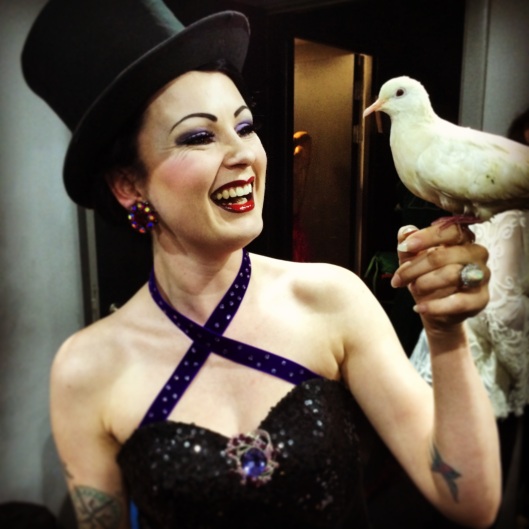 I’m back up for more fun on the 27th and the 28th June, so Glasgow, get your tickets here and join Gypsy and I and a host of glorious cabarati for a hilarious evening of fantastic variety.